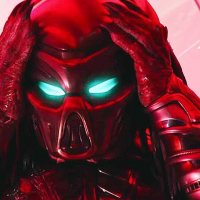 Royce21 Young Blood☠️
May 2019 in Click Click Click...
Due to The Predator disappointment to launch the franchise back, I took it upon myself to develop a new, fresh clean true sequel to Predator, Predator 2 and Predators. I call it Predator Bad Blood.

The film takes place on Earth in Afghanistan of 2018, a private military team hired by Sean Keyes goes missing in the deep forest of Afghanistan to collect Yautija Technology after they tracked it and disguise the mission as “taking down a ISIS leader threatening to kill more US soldiers” A Navy SEAL leads a joint operation of Marines, Air Force and Army to find them and complete their mission but soon find out they are at the hands of crazed serial killer and criminal to Yautija Prime, the Bad Blood Predator as they fight for survival against the unseen force. They battle with The Bad Blood, A Yautija Bounty Hunter, The Enforcer tracks down the Bad Blood and tries to put an end to his reign of terror.

This idea came from both comic books, Predator Bad Blood and Predator: Hunter 2. This film is action-thriller, horror. As it’s going to capture the tension of the original classic and expand the universe of the Predator than a hologram shown in the bio-mask. It’s still a work in progress but I want to know what you guys think of this idea. Constructive Criticism will be welcomed.
5