Here's an idea for Predator 5 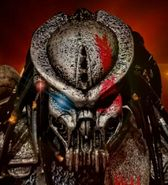 Xenosaurian Young Blood☠️
April 2019 edited April 2019 in Predator Movies
Picture this. Taking place around the year 2187 AD, a Weyland-Yutani research vessel by the name of USCSS Leviathan (that's a bit of a special reference) accompanied by a troop of Colonial Marines sets down on a planet called LV-497. It's a hot and dry desert world covered in sand- and thunder-storms, orbiting two red suns, and found to be rich in various minerals and other valuable resources. But they also find out that it is filled with ruins from a seemingly long-lost civilization worshipping some sort of "sun god", and once the expedition has established a base camp on the planet, soldiers start disappearing and being taken by "sand ghosts" with their bodies found mutilated in a ritualistic fashion, and it is up to General Paxton with his mechanical arm to track down and eliminate these wicked alien foes and uncover the planet's ancient secrets along the way. That's a little Predator 5 story idea I've been working on (currently titled "Predator: Heat of the Hunt" or "P:HOTH" for short). So what do you guys think?
"How about we make a campfire, sing a couple of songs?"
9